15 in stock (can be backordered)

Once upon a time, the lakeside Kingdom of Thorin Vale was suffering from the death of its benevolent King. All hope now lay with the Princess who was set to marry the bravest knight in the land, and their union would restore the realm. However, on the wedding day, the evil Dragon Maelfesto attacked the castle by surprise and took control! The serpent drove everyone out and took the princess captive in the caverns below, wickedly enchanting the palace never to be seen again. Riches, honor and glory will be gained for those who save the fair maiden, defeat the beast and return alive from the Palace of the Dragon’s Princess! 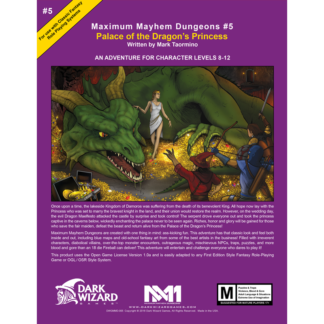 You're viewing: Palace of the Dragon’s Princess – Softcover Book + PDF $25.00
Add to cart